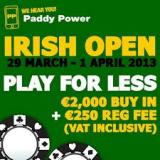 The launch of the 2013 version of the Irish Poker Open has come with a nice surprise for players; a reduced by in.

Paddy Power is the betting firm behind the tournament and they have confirmed that they have listened to previous player feedback and put down the buy in to €2,000 + €250. This should ensure that more players than ever take part in the Irish Poker Open next year.

The event is scheduled for the Easter weekend in 2013, which runs from the 29th of March through to the 1st of April. As well as the main games there will be a host of other events lined up before then.

The online qualification route for the Irish Open kicked off on Sunday the 25th of November and will be open on a weekly basis from now on.  Some of the winning packages up for grabs let players enjoy the action in style by staying in the Burlington Hotel while they play.

The Sole Survivor competition will also be up and running again this year. If you get into the 2013 Irish Open through the Paddy Power site then you are eligible to take part in this. The player who lasts the longest time in the main event gets €50,000 and buy ins for both a 2013 World Series of Poker event and the 2014 Irish Open.

A spokesmen for the Irish betting firm said that it was “Europe’s favourite poker tournament” and that the buy in has been reduced to “suit many more pockets”.

Site Of The Month


Guts Casino brings new games from BetSoft, Net Ent, Microgaming and IGT. New players can claim up to £300 and 100 free spins when they join guts.com.

October 2015
Leo Vegas obviously believe that variety is the spice of life because they offer players games from four of the best casino software suppliers. They also extend a rather generous sign up offer to all players, so you know...

New online casinos are the lifeblood of the gaming world. This is the reason we search long and hard for the newest casino sites, making connections with operators to ensure we bring you them first.

Every month we run a free casino competition, you can enter these competitions by visiting their respective page.

Prizes for the home, casino chips, electrical items - we giveaway them all!

The online casino scene is booming which is why it's so important to do your research before choosing a casino site to call home. Read the latest casino reviews arranged alphabetically.

The rise of the Internet casino market in the UK is great news for gamblers. Internet casinos are doing their best to attract new players to their sites with no deposit casino offers and promotions.